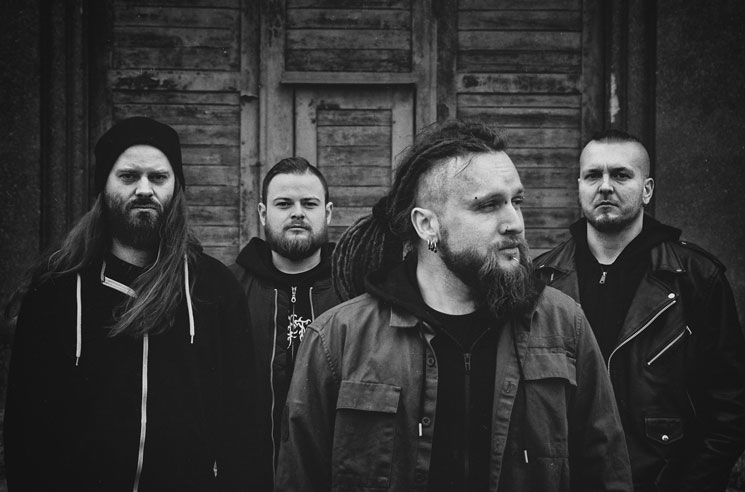 All rape and kidnapping charges against the four members Polish metal band Decapitated have been dropped following a move from prosecutors.

Decapitated members Rafal Piotrowski, Waclaw Kieltyka, Micha? ?ysejko and Hubert Wiecek were to head to trial later this month in Spokane Country Superior Court after they were alleged to have kidnapped and gang-raped a Spokane woman in August. However, Spokane County prosecutor Kelly Fitzgerald filed a motion today dismissing all rape and kidnapping charges against the band, the Spokesman-Review reports.

While the exact reason remains unclear, the prosecutor’s motion cited “the well being the victim” as a reason for dropping all charges without prejudice. This does mean, though, that the four band members could be prosecuted in the future.

Now that the charges have been dropped against the band in the U.S., Decapitated will be heading home to Poland. Lawyer Steve Graham, representing Kieltyka, told the Spokesman-Review that “everyone is relieved and they’re looking to get back home.”

According to Graham, new evidence recently came to light that “seriously cast doubt” over the case against the band. As previously reported, the case against Decapitated largely hung upon the testimony two women who had told police they were kidnapped and held against their will after Decapitated’s show in Spokane on August 31. One the women claimed to have escaped the bus, while another said she was brutally raped by each member the band in the bathroom the tour bus.

As Spokesman-Review reports, police noted after the incident that the alleged victim had “significant bruising to her upper arms consistent with being restrained” and “small abrasions to her knuckles that were scabbed over.”

However, Graham now said Spokane police may have been misinformed on how physical metal shows and resulting mosh pits could get, which could have explained the woman’s bruising.

“We subpoenaed the list concert attendees and found numerous people who say that she was in the front row the mosh pit and was climbing up on stage, and getting jostled about as much as anyone else there,” the lawyer said. “There’s no question from our perspective that the case against these four guys was falling apart.”

Adding to this, the band’s defence team had planned to cast doubt over the accuser, who they deemed untrustworthy based on a previous encounter with police, Spokesman-Review reports. In 2014, the alleged victim had admitted to lying to police about injuries she sustained during a domestic assault with her boyfriend.

However, as press time, the Spokane County Prosecutor’s Office has not made any ficial statement on the case or exactly why the charges were dropped.

Since the allegations, Decapitated have always claimed their innocence, previously releasing a statement denying all allegations and asking “everyone please reserve their judgement until a definitive outcome has been reached.”