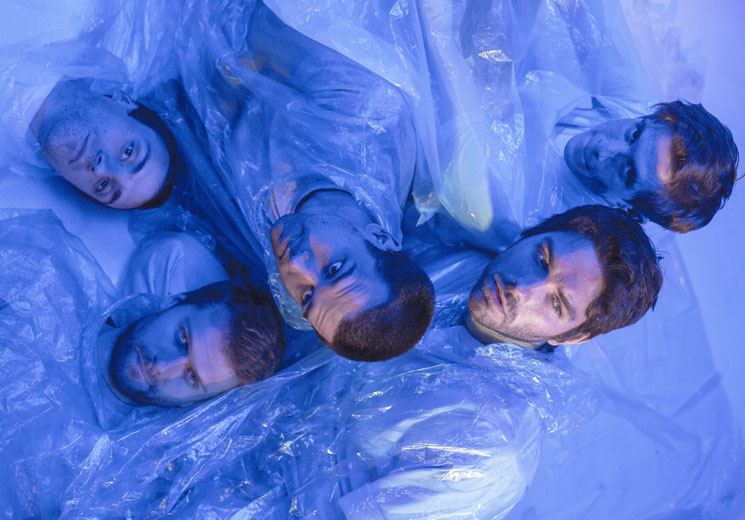 Though they have yet to release a full-length, Ontario experimental pop group Jaunt have already proven themselves to be masters subtlety. On their debut EP Chat and latest single “Machined,” the band weave small, intricate details into their sound, which seamlessly interpolates elements R&B, jazz and pop.

Speaking with guitarist Pat O’Brien, it’s clear that Jaunt are launching their own pop rebellion, even if they are not be aware it, imbuing their actions (if not their intentions) with an anti-establishment sentiment.

The earliest incarnation Jaunt formed in 2014 as a partnership between O’Brien and Thomas Helliwell while the former was living in his Hamilton, ON hometown. “Tom and I wrote a bunch music very casually,” O’Brien says, “not even with the intent fully being a band. And then I somewhat idiotically decided to book us a show at the Casbah in Hamilton. That sorta became, ‘Alright, now we have to put together a band.’ So we did that.”

Though there have been lineup changes since, there are some elements from that first, accidental show that remain, including member Daniel Reardon and the song “Intimate Sunset.” The band’s current lineup is rounded out by bassist Duncan Hood and drummer Nick Nausbaum.

Their apathy toward touring is informed by years playing.

The members’ experiences inform their current attitude on touring. “The number times I’ve played shows to two people over Canada is something I’ll never forget. It’s a tough slog, and Canada without a van is a tough place to tour, so I guess at this point in time, we’re really mindful what we’re doing behind the scenes,” says O’Brien.

“We’ve never really been much a touring band, per se,” he admits. “I don’t think any us are set on the idea having to own a van as a goal. I think that’s kind like a  I don’t know if I’d say a changing model, but you don’t have to do that these days.”

“Obviously we’d like everyone to hear our music, he continues. “Getting it out there on Spotify, the means is obviously as important as ever. I guess we’re cognizant that as well. We just want to take it as far as possible while being true to what we’re trying to make, I guess.”

Live shows change things up from their studio recordings.

Though their current aspirations don’t involve long stretches on the road, Jaunt still want to make live shows special. “We’re pretty different live band in the sense that we play a lot the songs mildly differently live; we’re a little jammier, we extend them. We like it that way, it keeps it fun for us, and is hopefully entertaining for other people.”

On how the live renditions and studio recordings inform each other, O’Brien goes back to “Intimate Sunset” as a prime example. “When we first recorded the whole thing, we did it exactly how we do it live. It felt good, but we decided to strip back the second half the song and make it a little more vocal-heavy and less an all-in band thing than we do it live.

“I don’t think that’s necessarily something that we’re gonna end up doing live. We’ll probably keep it the way we have done it live, because it works in that context. But on a recording, it’s nice that you don’t have to do that exact same thing, and I don’t think that one is necessarily better than the other.”

Hip-hop is a major influence, though not in the way that you’d think.

Though you can hear elements from the band’s biggest influences,  including Stereolab, Arthur Russell, Nat King Cole and a bevy ’90s soul artists, their love hip-hop manifests itself not in sound, but in practice.

“We take from hip-hop culture in that you can use a sample in a way that someone doesn’t necessarily know that it’s the particular thing that you took it from. We do tons little samples like claps and snaps all over our music that are from popular recordings. That’s a pretty common technique in electronic music in general, so we do that kind stuff all the time.”

If you listen closely, you can hear elements from some the band’s favourite tracks hidden recorded tracks. “There’s an Alicia Keys sample and a Paris is Burning sample, which are both just things that we like, and just put in the music because we wanted to, because we felt that it was a good reflection where we were at. But it’s not something that’s like, ‘Oh right, this sample is the origin the songwriting.’ It’s usually something to accompany a pre-existing song,” reveals O’Brien. “The samples don’t inform the makeup the song. We like using it because those are some our influences. We’re all very big Dilla fans, so that’s something that we’re inherently into.”