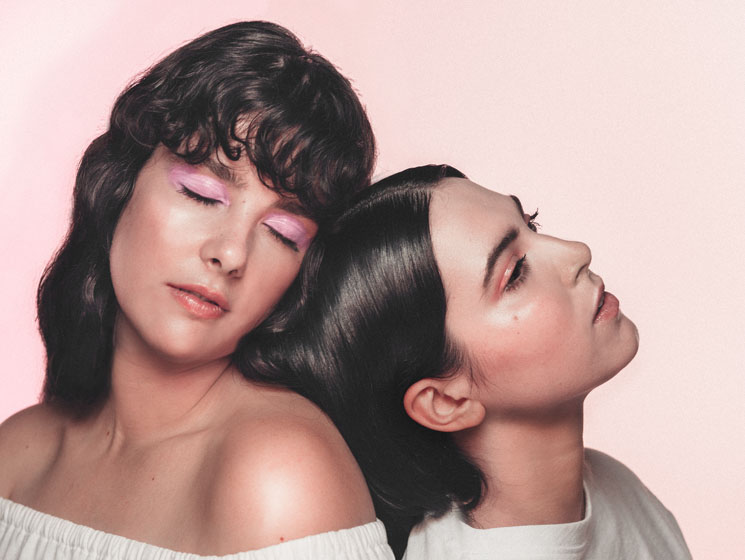 “It was the perfect house,” Camille Poliquin recalls, a cabin she and Milk & Bone bandmate Laurence Lafond-Beauline sequestered themselves in last winter. It was an hour-and-a-half away from the distractions Montreal; over five days the duo relaxed and wrote, laying foundations for their second album.

“We both had our separate rooms and could just wake up in the morning and write, and put a fire on and watch a movie,” she says. “It was the winter, too, so we just stayed inside: we didn’t go hike or anything.”

That cabin stint marked the first time the duo had shared new songwriting ideas with each other. The success their debut, 2015’s Little Mourning, kept them busy: the album was longlisted for the Polaris Prize, and filmmaker Podz had the duo score his film, King Dave, after catching their Osheaga set. Milk & Bone earned a Canadian Screen Award nomination for Original Song for the film’s theme song, “Natalie.”

“It was kinda strange, when we first showed each other our new stuff,” Poliquin says. “We spend so much time together, but we don’t really share the music that we write when we spend the time together.”

Strange maybe, but unified: their individually crafted ideas pointed in the same direction. That now-complete album, Deception Bay, finds Milk & Bone doubling down on the intimate catharsis they seem uniquely potent in conveying. If Little Mourning‘s dreamy refractions longing and loss lingered on the interplay synth, harmony and sentiment, Deception Bay expands both depth and range, spanning the smallest new-crush moments to a post-relationship reckoning on the title track.

“It’s still very intimate, but I think we opened the scope a little more,” Poliquin says the album. “Into a reflection onto what’s intimate.”

Lived experience radiates through Deception Bay. Poliquin notes that squaring up deeply personal moments in song is a way processing them f the page, too.

“It’s a bit a therapy: you don’t know how to deal with a certain situation, and that’s how you express it, and then it makes it a lot easier to understand,” she says. “Sometimes you don’t really know you’re facing a wall, and then you write the song and realize what’s going on.

“Other times, it’s more a reflection what happened,” Poliquin continues. “Looking back at a certain moment or certain issue or problem, and reflecting on what happened, and why you think it went that way, and what could’ve been different.”

To hone their ideas, the duo went into studio with producer Gabriel Gagnon — who helped craft Little Mourning — and called on outside collaborators like house producer CRi, Max-Antoine Gendron, Jonathan Dauphinais and Grammy nominee Chilly Gonzales. All fered nuanced add-ons to the duo’s sound, but Milk & Bone still draw most their strength from the growing confidence their initial, serendipitous connection: a desire to collaborate that formed when Poliquin and Lafond-Beauline both showed up to sing on a mutual friend’s album.

“It was just kind a feeling that we both wanted to create together,” Poliquin says. “We didn’t know what it was gonna be; I’d never heard any her songs before, she’d never heard any mine. It was kind a leap faith, I guess. And it worked out, but sometimes I think about it: we started this project about three or four years ago, and nothing’s been the same since. Everything could’ve been so much different.”

Deception Bay is out now on Bonsound.