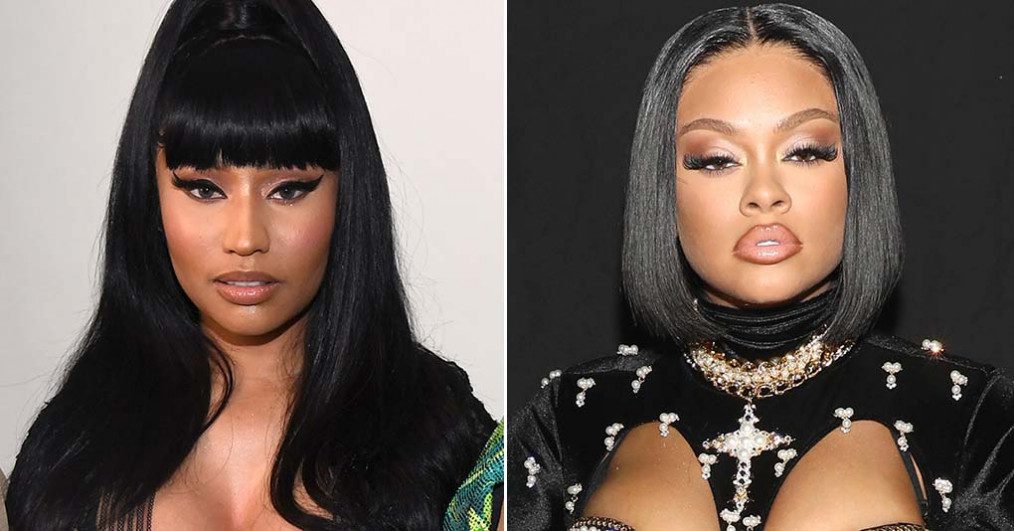 Nicki Minaj and Latto’s relationship took a turn in an explosive feud that played out on social media on Thursday night.

It all started while Nicki was discussing the Grammys’ controversial decision to remove her hit “Super Freaky Girl” from the rap category and have it compete in the pop category. While calling out the Grammys, Nicki brought up another Grammy contender, Latto’s “Big Energy.”

After “Big Energy” was mentioned, Latto seemingly responded to Nicki on Twitter. “Damn I can’t win for losing… all these awards/noms I can’t even celebrate,” she wrote.

Latto, who has often professed her love for Nicki, appeared to message Nicki privately about the issue. “I agree w you however because of where we left off ion think u need to bring my name/song up to prove ur point,” she wrote.

Nicki shared the DM publicly before taking shots at Latto, calling her names like “Karen” and “Scratch Off.”

“This Karen has probably mentioned my name in over 100 interviews,” she tweeted. “Says she waited in line for Pink Friday w|her Barbie chain on, bangs, pink hair…but today, scratch off decides to be silent; rather than speak up for the black woman she called her biggest inspiration.”

Latto responded, “1st of all I texted u cause I didn’t wanna do the internet sht w sum1 I looked up to. Just like the 1st time I DMed u asking about ur ongoing subtweets. I wanted to speak up cuz like I said I do agree but the way u going about it seems malicious esp. after how we left off.”

From there, things exploded in a series of back and forth exchanges. Latto accused Nicki of subtweeting her, sharing various tweets, and called her a “40-year-old bully.”

“I’ve ignored countless subtweets since March and instead addressed u in the dm. You’re asking why I didn’t speak up in ur defense… it’s the same answer I gave u when u asked why I didn’t congratulate you. Ur literally older than my mom tryna be a bully @NICKIMINAJ.”

I’ve ignored countless subtweets since March and instead addressed u in the dm. You’re asking why I didn’t speak up in ur defense… it’s the same answer I gave u when u asked why I didn’t congratulate you. Ur literally older than my mom tryna be a bully @NICKIMINAJ

Minaj fired back, “Age shaming when you look like YOU the one pushing 40. … Oh so you in your 20’s. Oh ok then. At least it match your album sales. You sold 20K right?”

Nicki also denied that she was subtweeting Latto, suggesting that Latto is upset because Nicki turned down her feature requests on multiple occasions, including an offer to remix “Big Energy.”

Nicki proceeded to air out her DMs from Latto. “Now pay attention. every dm from scratch off is about a feature,” she said. “I was kind every time. But scratch off feels she has pull behind the scenes wla few diff white men (won’t name right now).”

She also accused her of starting “fake beef” and criticized her album sales. “Scratch off is just an entitled Karen who blames others for her album flopping,” she said.

Things got personal when Latto brought up Nicki’s husband and brother, who was sentenced to 25 years to life in prison for sexually assaulting an 11-year-old girl.

“Things BEEN subbing… super freaky grandma is married AND related to fucking rapists. You ain’t gone bully me BITCH! My idol turned rival now u hating!” she wrote, adding, “I’ll die on this hill by myself! Everybody ain’t lying on you! We see the pattern! BFFR!”

After Nicki accused Latto of using ghostwriters, she clapped back. “I heard a few of ur refs before they came out too boo,” she said. “U forgot WE ALL collab w the same writers?? Difference is I don’t deny it. The world seen me writing since 16 on national TV tho.”

I’ll die on this hill by myself! Everybody ain’t lying on you! We see the pattern! BFFR!

The feature was never the problem..u passed on the TWO songs I sent & I still showed love??? U not the only person I’ve sent songs to that passed lmao. Never took offense. IMA RAPPER. Cute way to spin the narrative tho https://t.co/lvLjG1BI4T

I’ll post em my got damn self. They’ll all tell u I WRITE TOO! I heard a few of ur refs before they came out too boo. U forgot WE ALL collab w the same writers?? Difference is I don’t deny it. The world seen me writing since 16 on national TV tho ✍️🥴 https://t.co/cVcb0l5LN3

After her rape comments, Nicki dismissed Latto for pretending to care about rape victims by pointing out her affiliation with Kodak Black, who is featured on her album 777, and the sexual assault allegations against Dr. Luke, who produced “Big Energy” and “Super Freaky Girl.”

“News flash scratch off. I’ve never raped anyone. I’ve inspired millions. You’re one of them BOZO,” Nicki told her.

“Y’all keep letting these bozos weaponize the WORD rape when they’re being dragged & not holding them accountable for not actually CARING about rape VICTIMS in REAL LIFE,” she continued. “They have the same 2 drags about me & one of them ain’t eem bout me. That’s how you know when you dat btch.”

Nicki also reposted a fan who insinuated that Latto’s mother was not of legal age when she was in a relationship with Latto’s father.

Hours into their beef, Latto shared a voicemail from her conversation with Nicki where they got into it following an interview where Latto said Nicki was once the only female rapper running things, but now others are “flourishing.”

Let’s not forget how she subbed you on Queen radio as well! She was mad you said everyone was thriving and said don’t categorize yourself with her. pic.twitter.com/RuQFyV8Hxd

Lemme specify I’m sorry. Im delusional for saying “we’re” (newer female rappers) are flourishing & u said no one cares about my little song LYRICS my bad. FYI I only recorded cause I KNOW who tf I’m playing wit #40yroldbully https://t.co/ocBAA3uVeF pic.twitter.com/RHqEu8XFYD

Nicki eventually deleted most of her tweets about Latto, while sharing a meme from Whitney Houston’s “One of Those Days” video.