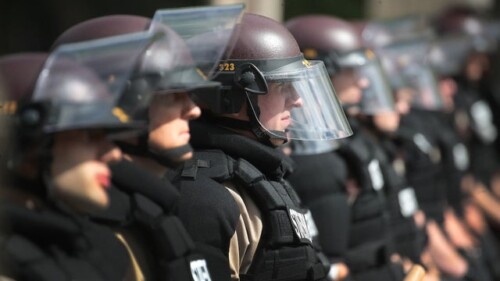 Officer involved in George Floyd death leaves jail after posting bond One of the officers present at the scene where George Floyd was detained by Minneapolis police shortly before his death has been released from jail on bond. CBS 4 Minnesota reported that Thomas Lane, who was charged along with two others of aiding and abetting second-degree murder and manslaughter, bonded out of Hennepin County Jail on Wednesday after making a $1 million bail. His attorney, Earl Gray, has maintained Lane’s innocence and told CBS in a statement that Lane attempted to revive Floyd after the handcuffed man lost consciousness.

Video of the arrest showed another officer, Derek Chauvin, kneeling on Floyd’s neck for several minutes. Chauvin now faces a charge of second-degree murder. “[Lane was] pounding on this guy trying to revive him. Where is the willful intent?” Gray told CBS 4. Chauvin, Lane and two other officers present at the scene have since been fired by the department and all four now face charges. Protests erupted in the city and in every state around the U.S. in response to video of Floyd’s arrest.

Activists in the city have called for the police department to be defunded and resources moved to social welfare programs and other needs. A majority of Minneapolis’s city council members have since vowed to disband the department and replace it with a new model of public safety programs.

“We are going to dismantle the Minneapolis Police Department. And when we’re done, we’re not simply gonna glue it back together. We are going to dramatically rethink how we approach public safety and emergency response. It’s really past due,” one city council member wrote on Twitter. The city’s mayor, Jacob Frey (D), has yet to sign on to the plan and was booed out of a demonstration last week after refusing to commit to defunding the department when asked by an activist.