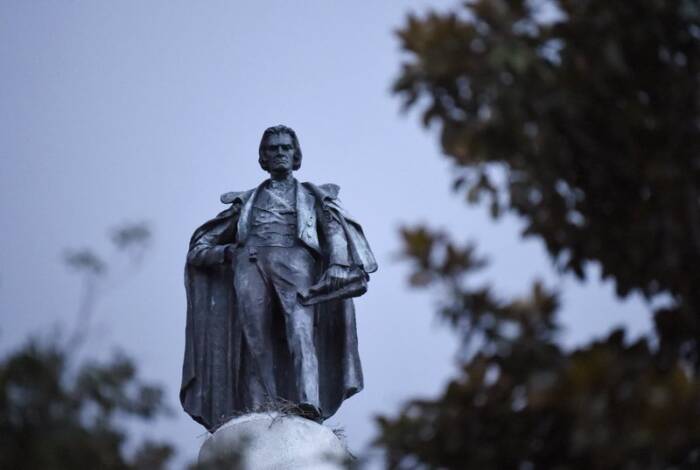 The historic South Carolina city of Charleston was removing a symbol of its legacy on Wednesday, with crews working through the night to take away a statue honoring John C. Calhoun, an early U.S. vice president whose zealous defense of slavery led the nation toward civil war.

But the larger-than-life figure of Calhoun — known as “The Cast-Iron Man” in the early 1800s for his unbending support of Southern states’ rights — was proving difficult to dislodge. After a nightlong struggle, contractors decided to bring in a diamond cutter to cut through a metal shaft securing his statue to a pedestal that towers more than 100 feet (30 meters) over a downtown square along Calhoun Street.

Charleston’s council and mayor voted unanimously Tuesday to move it to “an appropriate site where it will be protected and preserved,” the latest in a wave of actions arising from protests against racial injustice in America.

“I believe that we are setting a new chapter, a more equitable chapter, in our city’s history,” said the mayor, John Tecklenburg. “We are making the right step. It’s just simply the right thing for us to do.”

Dozens of residents spoke for and against the statue at Tuesday’s council meeting.