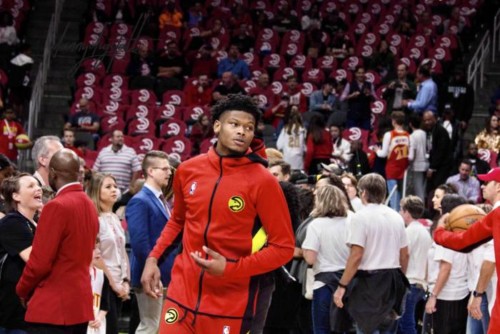 The 2019-20 NBA season is just getting underway and to start the year, the young Atlanta Hawks are undefeated. Tonight, on a foggy Monday in the “A”, the Hawks will face a tough opponent in the Philadelphia 76ers at State Farm Arena.

Hawks guard Trae Young is in his second season in the NBA and through 2 games, Young is averaging 38.5 points per night along with 7 rebounds and 9 assist. While many may be surprised by the Hawks start to season, this team is full young talent who will be able to compete with any team on any given night.

Will Trae continue to average 38.5 points? Will Joel Embiid be in the lineup??

Get down to @statefarmarena for the fun and action! See you there tonight #TrueToAtlanta #NBA pic.twitter.com/3oOR5WijpQ

That will be tested tonight at the (2-0) Philadelphia 76ers come to town. The Sixers have defeated the Boston Celtics and Detroit Pistons in their first 2 matchups this season, how Joel Embiid didn’t play against the Pistons. Embiid was active at Sixers morning shoot around this but he is still questionable for tonight’s game according to Keith Pompey.

The Sixers are a very tough defensive team and they are also one on the tallest teams in the NBA. That could cause problems for the Hawks in the paint. Former Atlanta Hawks all-star Al Horford returns to Atlanta tonight, this time as a member the Sixers. Horford was acquired by the Sixers during the NBA free agency period over the summer.

Jabari Parker could be a key player tonight in my opinion depending on how much the Hawks need to rely on him. Alex Len is probable and Bruno Fernando is questionable for tonight’s game. With the Sixers having Ben Simmons, Tobias Harris, Mike Scott and Josh Richardson in their rotations, the Hawks will need to counter that with length tonight. Hawks rookies Cam Reddish and De’Andre Hunter will play against their hometown team tonight. Reddish growing in Norristown,PA which is right outside Philadelphia.

The Sixers vs. Hawks take place tonight (October 28th) at State Farm Arena. Follow @eldorado2452 on Twitter and Instagram for all your Atlanta Hawks, NBA and sports news.